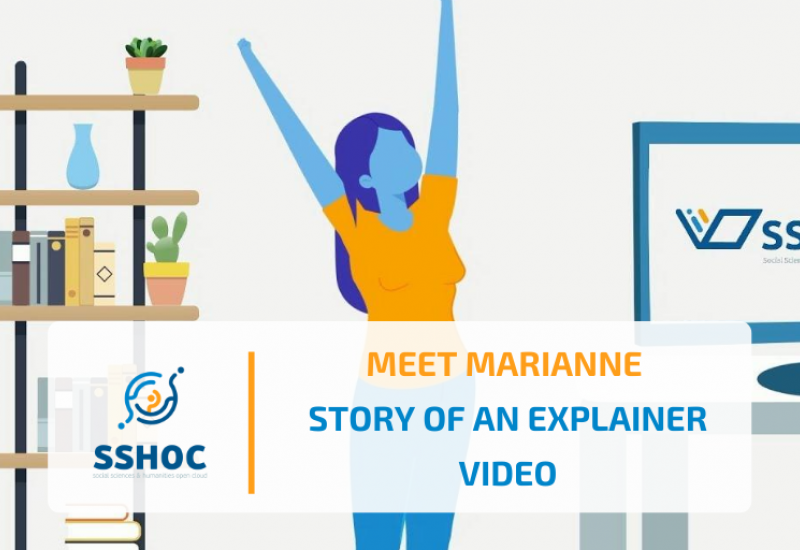 SSHOC have released an animated video to promote their search for SSH Open Marketplace testers.

Launched in tandem with an online collaboration platform which will facilitate closed communications between testers and the developers of the SSH Open Marketplace, the video presents a vision of a discovery portal which pools and harmonises all the services, software, training materials, datasets, workflows and scenarios Social Sciences and Humanities researchers might need during the research data life cycle.

The video was written and produced by SSHOC partner Trust-IT and is based on the real-life use case of Marianne, a literary historian looking to mine information from scanned images and not sure where to start or how to proceed.

After an exhaustive  but exhausting search through mountains of disconnected resources, Marianne arrives, tired, confused, and not much wiser, at the SSH Open Marketplace. And like Hansel and Gretel following the trail of breadcrumbs to their father's door, she realises she's found a network of interconnected resources which provide a step-by-step guide to solving her problem.

The video features a multitude of screenshots sourced from the SSH Open Marketplace. Given that the platform is still in development, this posed some problems for the scriptwriter - and for the videographer! The video is also much shorter than originally planned. A second use case was included in early versions but Marianne's colleague, a Social Sciences professor, was written out of the script eventually so as to keep the final product to under three minutes in length.

In keeping with the best practice in agile and user centered design which has characterised the development of the SSH Open Marketplace to date, this new phase will be as reliant as ever on input from the Social Sciences and Humanities community. The first public consultation has already taken place with the DARIAH community, and others are in the planning stages. Simultaneously, the tester recruitment drive is underway.

After the Beta release in December 2020 and until the release of the final iteration in December 2021, the SSH Open Marketplace will be made available to the wider community so that all users can further improve data quality by suggesting content additions, changes or updates.

To learn more about what to expect as a tester, and to join the SSH Open Market Tester Community, click here.

SSH Open Marketplace: Notes from our Public Consultation with DARIAH

SSH Open Marketplace: What’s in it for you?

SSH Open Marketplace: How and when can you contribute?

Do you work with social media data?

SSHOC has published the first in an ongoing series of one-on-one interviews...