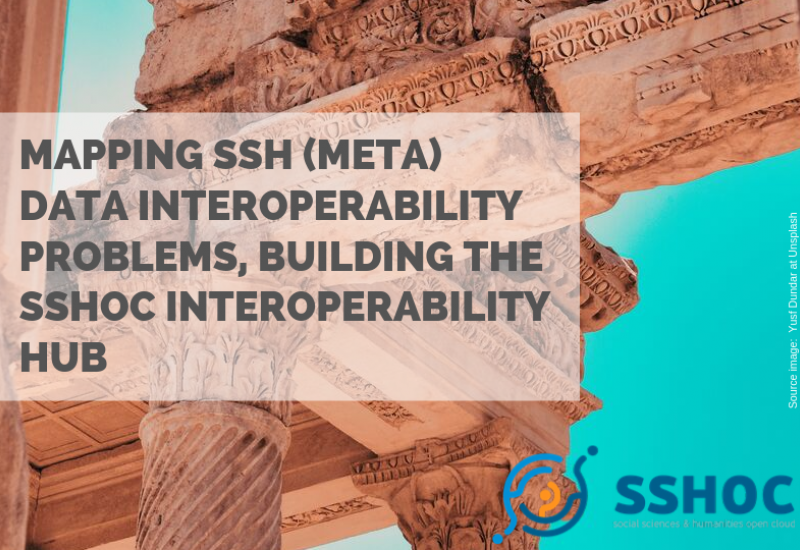 SSHOC aims to provide common services, integrate existing ones, and increase cooperation between the federated research infrastructures within the project. One challenge in creating common services is the diversity and varying practices of different fields of science. This can be seen in the work for SSHOC’s Data and Metadata Interoperability Hub, where we map interoperability issues and solutions across SSHOC member organisations. This article will highlight the main findings from the recently published Report on SSHOC (meta)data interoperability problems.

The goal of the report was to find out what kind of interoperability problems there are for research data and metadata in SSHOC member organisations. We also tried to find metadata and data standards and formats that can be recommended for all organisations.

We interviewed 16 people from six research infrastructures and four fields: social sciences, language sciences, arts and humanities, and heritage sciences. The interview findings were supplemented with desk research on the number of records and data formats on the websites of repositories.

When interviewing the informants, it quickly became clear that the data formats used in the fields vary a great deal. In social sciences, the data are often in the form of a data matrix or text, while language sciences use a lot of text and voice data. Images are common in the humanities, and in heritage sciences, a dataset can consist of objects or 3D models, among others. Despite the differences in data types, the interoperability problems were similar in all participating organisations.

All in all, fewer interoperability problems were reported than we expected. One reason for this might be that organisations have reacted to the problems by developing their practices around them. On the other hand, we also observed differences between the organisations in their maturity levels in terms of how well they take interoperability into consideration.

One size does not fit all

Common solutions through cooperation in SSHOC

The report on SSHOC (meta)data interoperability problems shows that developing common services is not always straightforward. Different communities not only have their own needs but also their established practices. However, the purpose of the project is not to fit everyone into the same mould but to create tools and services beneficial for everyone. Cooperating and gaining perspective into the processes and challenges of other communities and organisations is useful also because the problems encountered are often similar, and someone might have already found a solution that works for everyone. The next objective of the Data and Metadata Interoperability Hub is to chart solutions to metadata and data interoperability problems.

Tell us about your SSH (meta)data interoperability needs. Join us at the "EOSC Services, Collaborations and the RDA" discussion. register here.

From January 2019 to April 2022 SSHOC transformed the current social sciences...

The SSHOC’n Tell Challenge was a hackathon run parallel to SSHOC’s final...

EOSC - What is it and does it pay off? In this new podcast series, we are...

An exciting new training tool has been released by the SSHOC project, teaching...

From SSHOC to the SSH Open Cluster