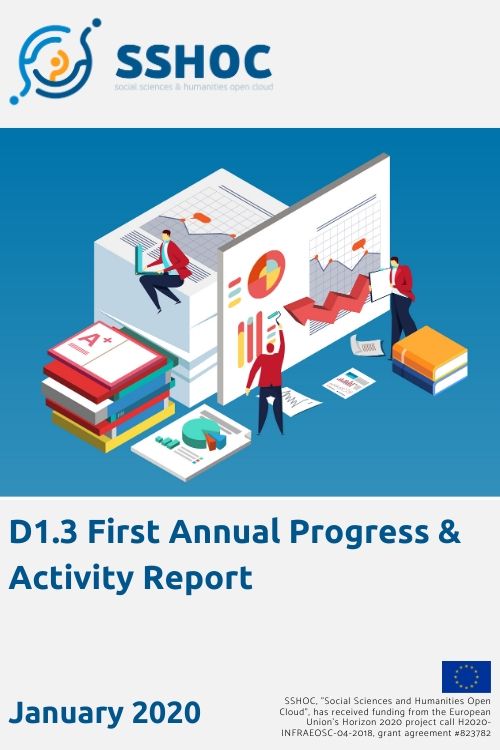 This deliverable is the first annual progress report for the SSHOC project, and as such, one of three planned progress reports to be delivered during the project lifetime. It states the progress and status of work in the first year of the SSHOC project (M1-M12). The information gathered here will be updated after six months, (and thus form the official EC periodic report); the next progress report will follow in 2021. The report starts with a general plan for the SSHOC project in Year 1 (2019), and lists the main objectives set up to be achieved. The main part of this deliverable follows activities described in chapters which go into details about highlights and achievements on the level of each Work Package and on the level of Tasks, with notes on deviations from the DoA. The final chapter contains the summary on the delivery of project outputs (namely deliverables), achievement of project milestones, use of resources, and risks met in the Year 1 across all Work Packages. This progress report, and the two that will follow at the end of each project year, form the basis for more extended reporting to the European Commission and provide overview and further improvements to the ongoing work.

Idea of collaboration between research infrastructures and disciplines is...

Workshop notes: Code of Conduct for the Social Sciences and Humanities